Why is there a ghost in the side projection of the projector?

It has become the choice of many young people to put a projection in the bedroom and lie on the bed comfortably to watch movies and chase dramas. And if the room is not considered to reserve space for the projector during the room decoration, or it is not possible to carry out the ceiling mounted front projection, the projector needs to be placed on the bedside table for side projection.

Many smart projectors now support keystone correction, so side projection is not a problem. However, when some friends use the side projection, they will find a faint “spot” appears outside the screen, which affects the viewing effect. So what is going on?

So is there a way to eliminate these spots? In terms of mechanism, the side-projection spot cannot be eliminated. Only the front projection can make the “non-appearing” spot, so if there are conditions, it is recommended to use the front projection. Or in the living room with part of the light, the light spot part will be inconspicuous because of the low brightness.

In summary, we can know that the side-projection picture can indeed be viewed through keystone correction, but after all, there will be some picture loss, which does not make the picture effect optimal. The front projection or side mounting on the wall or on the coffee table can avoid the “spot” effect and make the projection effect better. 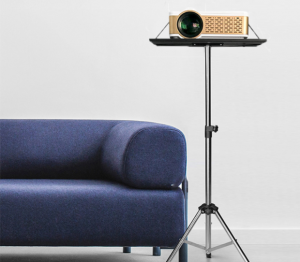 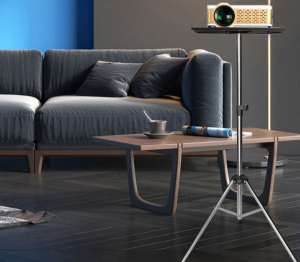