Electric screen is currently the most widely used screen. It is easy to use. There are two control methods: wireless remote control and wired control. Generally, synchronous motors or tubular motors are used to control the lifting. The slower lifting speed is the synchronous motor, and the faster speed is the tubular For the motor, the latter is far superior to the former in terms of life and effect. The curtain material is generally made of white plastic cloth or glass fiber cloth. White plastic curtains are widely used in low-end curtains because of their low cost, and glass fiber fabrics are often used in mid-to-high-end curtains because of their material characteristics.

The picture frame screen is a screen in which a rigid frame is used to tighten the screen through connecting pieces (such as springs, drawstrings, fasteners, etc.) to form a projection plane. What is common in zui is the picture frame screen used in home theaters. A set of sturdy aluminum alloy frame stretches the screen surface. Because of its simple structure and conforms to the principle of mechanics, the screen surface can always maintain the best flatness, so it becomes a family. The first choice for theaters.

There is another kind of picture frame screen, which refers to the projection screen style of the movie theater. The frame is designed in an arc shape, giving people an excellent sense of picture envelopment, which is more common in 2.35:1 screens. Since there is no corresponding standard in the industry for home arc screens, it often refers to the arc ratio commonly used in commercial theaters: arc height ≈ 5% of the screen width. Of course, in order to obtain the best display effect, it is essential to equip the projector with an anamorphic lens. 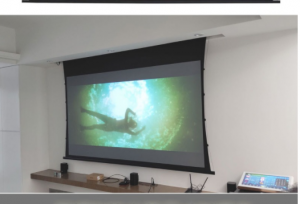 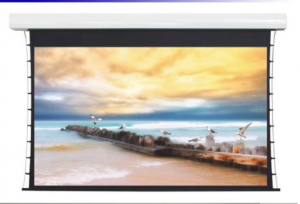